In organic electronic devices, such as modern displays with organic light-emitting diodes (OLEDs), organic materials connect to metal electrodes. The resulting metal–organic interfaces, which are in the focus of SFB 1083, determine important performance parameters such as rates of charge-carrier injection. Precise control over the interface properties, especially the wave-function overlap and the energy-level alignment, is therefore critical for rational improvement of organic electronic devices. Here, the SFB 1083 projects A4, A6 (both Univ. Marburg) and A12 (at FZ Jülich), together with groups in Utrecht (NL), Warwick (UK) and Erlangen (DE), show that the properties of metal-organic interfaces depend strongly on the linking pattern of the atoms in the organic material.

In organic semiconductors, the carbon atoms are typically laid out in a honeycomb-like sheet of abutting six-sided rings. If the sheet contains no odd-numbered rings, it is described as an “alternant topology.” Researchers rarely consider nonalternant topologies, which occur when the structure contains, for example, five- or seven-sided rings. To elucidate the influence of the topology on the interaction with a metal surface, the authors compare the aromatic hydrocarbon naphthalene to its nonalternant isomer, azulene, and study their interactions with a copper surface. 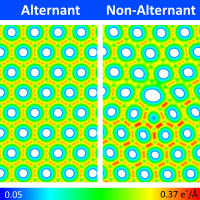 Azulene-like nonalternant 5-7 structural element embedded in a graphene lattice (right), compared to the ideal graphene lattice left. The figure shows sections through the charge density for both systems, according to DFT calculations. The 5-7 element accumulates negative charge (red) at the 5-membered ring and positive charge (blue/white) at the 7-membered ring. Copyright by CC-BY 4.0.

Benedikt Klein and his co-workers find that azulene forms a much stronger and shorter bond to copper than naphthalene. Spectroscopic analysis of the electronic structure reveals that azulene forms a true chemical bond and receives negative charge from the surface, whereas naphthalene bonds only weakly and does not exchange charge. Theoretical analysis reveals that the influence of the topology on the electronic structure, especially the lowest unoccupied molecular orbital, is responsible for the different behavior. This comprehensive analysis of a surface chemical bond was only possible through a multi-technique approach, which involved a collaboration between six research groups from experiment and theory, including three from SFB 1083. Important contributions were made by the groups of Ingmar Swart (Utrecht, NL), Reinhardt Maurer (Warwick, UK), and Wolfgang Hieringer (Erlangen, DE).

Based on their findings, the authors propose that the incorporation of nonalternant structural elements can be used to control and optimize performance-related properties of functional metal–organic interfaces.

This site uses cookies – small text files that are placed on your machine to help the site provide a better user experience.

We may request cookies to be set on your device. We use cookies to let us know when you visit our websites, how you interact with us, to enrich your user experience, and to customize your relationship with our website.

Click on the different category headings to find out more. You can also change some of your preferences. Note that blocking some types of cookies may impact your experience on our websites and the services we are able to offer.

These cookies are strictly necessary to provide you with services available through our website and to use some of its features.

Because these cookies are strictly necessary to deliver the website, refuseing them will have impact how our site functions. You always can block or delete cookies by changing your browser settings and force blocking all cookies on this website. But this will always prompt you to accept/refuse cookies when revisiting our site.

We fully respect if you want to refuse cookies but to avoid asking you again and again kindly allow us to store a cookie for that. You are free to opt out any time or opt in for other cookies to get a better experience. If you refuse cookies we will remove all set cookies in our domain.

We provide you with a list of stored cookies on your computer in our domain so you can check what we stored. Due to security reasons we are not able to show or modify cookies from other domains. You can check these in your browser security settings.

We also use different external services like Google Webfonts, Google Maps, and external Video providers. Since these providers may collect personal data like your IP address we allow you to block them here. Please be aware that this might heavily reduce the functionality and appearance of our site. Changes will take effect once you reload the page.